“No thinking–that comes later. You must write your first draft with your heart. You rewrite with your head. The first key to writing is…to write, not to think!” —Finding Forrester (2000)

If you haven’t seen the film Finding Forrester, starring Sean Connery as a reclusive writer and Rob Brown as a gifted young man from inner city New York, you really must. It’s one of my all-time favorites. What’s more, it’s excellent for writers.

The above quote comes from a scene in the movie where Jamal Wallace (Brown) is tormented by the emptiness of the page. He doesn’t know what to write. He doesn’t know how to begin. That’s when brilliant, one-hit-wonder novelist William Forrester (Connery) delivers the above bit of slightly exasperated advice. 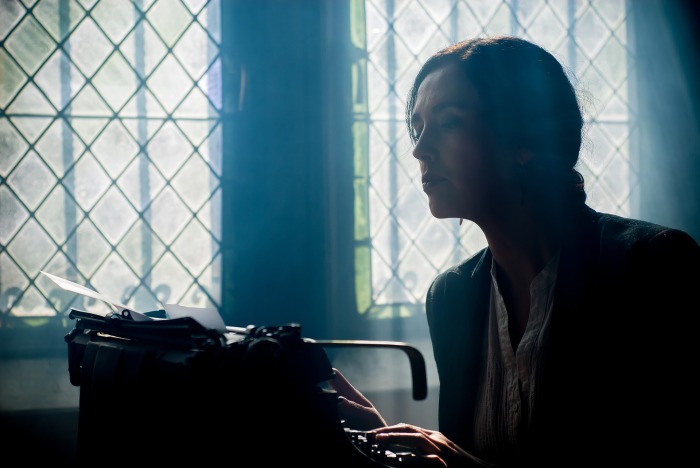 Like Jamal I often struggle with thinking too much when it’s writing time. I get caught in my head and the pressure paralyzes me. A very dear friend diagnosed my dilemma a few years ago.

“You know what your problem is, Rebecca?” she announced one day when I was griping about writing difficulties. “You think you have to know what you’re going to write before you write it.”

She was right. And still is. Like William Forrester in the film, this friend’s slightly exasperated advice cut to the heart of my writing problem. The problem, in fact, was me.

Throughout the writing life I am routinely my own worst enemy. I’m the one hindering my progress. I overthink on a regular basis. The thinking itself is good, but only as long as it stays in its rightful place. It is often the case that our greatest strengths are mirrored as our greatest weaknesses.

But there are ways to deal with the problem. Sometimes it means changing up your process or tricking your brain into working with you rather than against you.

The saying goes “don’t miss the forest for the trees” but it might as well go the other way too. Don’t get so caught up in the big picture of what you hope to achieve that you fail to execute the actual writing.

When I begin a new piece (and also when I’m deep in the middle of a project) I have big dreams. I brace myself for the sheer brilliance flowing from my pen. I imagine exquisite sentences, complex and interweaving character arcs, unique narrative structures, and a riveting plot beautifully balanced with description, dialogue, and narration.

You get the picture.

In any case, even when I’m being modest I can easily see the potential of a story, but as good as those dreams may be they tend to overshadow the steps it takes to actually get there. I don’t know how to begin,  what path to take, or what I’m writing just doesn’t measure up. Too many projects have collapsed under their own weight.

When the project turns daunting, best to break it down into manageable bits. Write out a sentence of the scene or moment you are about to write, then focus in on that one moment. You don’t need to know it all right now. Your reader won’t either. Give yourself the space to discover the story by getting it down just a little bit at a time. The rest will follow with time.

I’ve personally found success with the technique of writing sprints. Sprints are all about  writing in quick bursts with the inner editor turned off. The technique tries to make efficient use of short, valuable windows of writing time, but I’ve found it most effective because it demands writing instead of thinking. It’s challenging for the same reason.

Set a timer for a given amount of timer. It could be five minutes. It could be an hour. It’s up to you. While the timer is running you write. You don’t edit. You just write as much as you can in the allotted time. Keep track of your word count to follow your progress.

For more on this technique I recommend Chris Fox’s book, 5,000 Words Per Hour.

Odds are you’ll surprise yourself with the ideas that emerge simply by not thinking about them. You’ll have cleared the way for your imagination to get rolling and push your story to places you didn’t expect but were always just where you needed to go.

Give yourself the permission to do whatever it takes to get the story down. Break the “rules” of craft, of grammar, of point of view, etc. that you always told yourself were unbreakable. Write horrible sentences. If you must, write notes to yourself or flag trouble spots you’ll return to later on, but don’t edit. No yet.

Don’t ask yourself whether something will work or not. Give it a try. If it doesn’t work, there’s always the next draft for reworking. In my current draft, I’ve realized I’m going to have to try some messy things with point of view in order to figure out how the story works and what each of my character’s is hiding.

More often than not, my writing process is a battle. The process isn’t pretty, and the first draft material is even worse. But it doesn’t matter what it looks like; it matters that its on the page.

The time will come to sculpt the material into something lovely. You’ll have your chance to contemplate narrative structure, ponder line breaks, and fiddle with word choice. Draft one, however, is not that time.

As I shared a few weeks ago, the writing process is often one of discovery. The whole point is not to know what you will write when you write it. The point is to learn along the way and share as you find it.

Observe your writing habits this week. Take note of what thoughts crowd in your head when you sit down to write. What obstacles get between you and throwing words on the page? As you identify the obstacles you are most susceptible to, you’ll learn to strategize how to overcome them.

As Forrester urges young Jamal, write with your heart. Yes, the head stuff is important too, but we get into dangerous territory when we forget why we picked up pen and paper in the first place. We tell stories because we love them. We have something to say or to explore. Don’t forget to tell yourself the story. You are your own first audience. You may be the only one who ever sees your first draft (a relief for many of us), so have fun. Allow the story to surprise you. Pour your heart into it. You’ll write with freedom, and both you and your story will be better for it.

Rebecca knew she would be a writer when her 3rd grade teacher told the class to write a 1 page story. She wrote 3 pages. Since that day her stories have gotten longer and longer. When not dreaming up new stories or encouraging other writers to do the same, she's likely cheering on her favorite football teams. Rebecca graduated from Wheaton College where she studied English and Biblical Studies and will pursue her MFA at the University of Central Florida. She currently lives and works in central Iowa. Follow her musings on life and adventures in writing on Instagram: @rfoxwrites. View all posts by Rebecca